Skip to main content
Translatable
The Records area in the Metadata Editor is designed for cataloging a variety of records, such as bibliographic, holdings, and authority records, with the flexibility to handle different staff skill levels in order for everyone to work with the greatest efficiency. The Records area provides dynamic menus, navigation tools, and robust record-editing tools that include color coding, split screens, searching, and browsing.

When you open the Metadata Editor, you may create a new record (see New) or select an existing draft record from the Navigation pane.

For more information about working with the different types of records, see the following:

When you open a record in the repository for editing, it is checked out to you. This prevents other users from modifying the same record and perhaps overriding your changes. Other users that attempt to edit the record will see a "locked by" notation.

The records that you edit in the MD Editor continue to appear in the left pane until you release them, or till the working_copy_lock_timeout setting expires for a record and a different user, subsequently, edits that record.

The MD Editor provides flexible cursor placement when editing a field. You can position your cursor anywhere within a field to begin editing.

The flexible cursor placement functionality is not supported in the Internet Explorer environment.

In the Records area, some records may be identified as Pushed. This indicates that the record was queued to the Metadata Editor from another function in Alma. For example, while doing a repository search, you may determine that there are multiple records that you want to reference and work with in the Metadata Editor.

To push records to MD Editor:

Saving Records in the MD Editor

The MD Editor has an auto-save function that helps prevent changes from being lost before you manually save the draft. The auto-save occurs every 30 seconds after a change is made. Draft records are available for editing only to the user working on them and are persistent across Web sessions. Draft records are deleted if they have not been modified for thirty days.

When you finish working on a record, you can save the record from the Save menu or press Ctrl+S. The modified record is saved in the repository but remains checked out to you until you specifically release it (Save > Save and Release Record).

Alternatively, you can reload the original record from the repository. This replaces the current draft with the current version of the record and deletes any changes you have made. The record remains checked out to you.

While editing a record, you can also save a draft record, without checking the record in (Save > Save Draft or press Ctrl+Alt+S).

See Cataloging Privileges for additional information regarding saving records when you have implemented cataloging permission levels.

When you save a record in the MD Editor, the following normalizations are processed:

Expanding a Record from a Template

You can expand a record's data fields using a specified template. The record may be any of the following types: bibliographic, holdings, and authority. When the Expand from Template option is applied to a record in the MD Editor, the system uses the following process to expand data fields in the record:

For example, if the template's group contains the following data fields:

And the record's group contains only one matching data field:

To expand a record:

The Derive New Record tool in the MD Editor allows you to use the related bibliographic record and the default template as the basis to create a new record that includes either of the following types of relations:

Each of the above fields includes the following subfields, which are populated from the original related record:

The system removes empty subfields when the new holdings record is saved.

To derive a new record:

Similar to the support Alma provides for MARC 21, Alma provides support for related and derived UNIMARC bibliographic records. The related record information in the UNIMARC 4XX fields, as shown in the examples below, continues to be maintained in that manner in Alma (similar to the 77X fields in the MARC 21 format).

Since Alma uses the 001 field for the record ID (MMS ID) and the previous system ID is maintained in the 035 field, the Alma related records logic knows to check the 035 field for previous system IDs contained in the UNIMARC 4XX fields. The links between these records are created with the Alma MMS - Build Record Relations job (see Viewing All Scheduled Jobs) that is scheduled to run every day. Throughout the ongoing movement of records via import, export, publishing, copy cataloging, and editing with the MD Editor, Alma continues to maintain and manage bibliographic records using this format, logic, and processing.

Similar to the 773/775 Derive New Record function for MARC 21, Alma provides the same support for the UNIMARC 461 (Host Item) and 451 (Other Edition) fields. For more information, refer to Deriving a New Bibliographic Record - MARC 21.

Entering Diacritics and Special Characters in the MD Editor

When cataloging, you may need to enter diacritics, special characters, or non-Latin characters in the MD Editor.

To enter diacritics or special characters into the MD Editor:

For more information, see How to Input Special Characters in Alma.

The non-filing markers and indicators are used for display, sorting/browsing, and cataloging, as described in the table.

For UNIMARC records, Alma supports the cataloging convention of angle brackets, << >>, which are used in different regions to indicate non-filing markers. For example, UNIMARC uses the angle brackets to specify non-filing text such as il or le at the beginning (or middle) of a field.

See the table above that describes the manner in which Alma handles display, sorting/browsing, and cataloging when angle brackets are used for non-filing markers. See the illustrations below for examples. 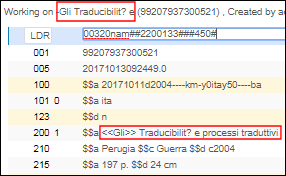 In KORMARC, non-filing characters are identified by surrounding the non-filing text in parentheses at the beginning of $a, and an indicator value of 1 in either the first or second indicator position, as identified in the table below.

Even though the non-filing characters are ignored for sorting purposes, the system displays the complete entry. For example: Using the same KORMARC record example above, the result The Journal of product innovation management. is returned when any of the following searches have been specified:

To view and assign collections, you must have the Collection Inventory Operator role and it must be scoped to the institution.

You can view the collections to which a record is assigned, and assign and unassign a record to a collection.

To assign a record to a collection:

When attempting to release Community Zone records from the Metadata Editor, you might get this message: "An external process has changed the original record. It is recommended to reload original record".

This message occurs when a record is open in the Metadata Editor (which means that it exists as draft), and while it is open, another process changes the record in the repository. The "other process" may be, for example, an API, a job running a normalization process on a set, or the authorities preferred term correction job. As a result of the change made by this change, the record opened in draft mode in the Metadata Editor is now different from the record saved in the repository.

This message notifies you of the change, and recommends reloading the record to get the most up-to-date version. To reload the record, select Record Actions > Reload Original Record.