Skip to main content
All customers beta/dev apps (referred to as Sandbox Apps going forward) will be moved to the latest version on the 15th January 2018 as part of campusM's move to Monthly Releases. Hockey App builds for the native apps will be made available during the week commencing 15th January 2018. This version will be available to deploy to live from the 5th February 2018.

Given the differing levels of detail and functionality available within Google and Apple maps depending on geographical location, we have enabled the Google Maps SDK within the campusM iOS App, allowing institutions or end-users to select their preferred mapping technology.

Institutions can choose which mapping technology is used by the iOS app, selecting either Apple or Google Maps. By default, this is set as Apple Maps, but customers can configure this directly within the app manager at a profile level. The configuration can be found within: App Settings > App Profiles > Change App Profile: You must publish the changes from the App Manager to become effective.

End-users have the ability to override the default within the settings on their campusM App (see below).

Following established practice, we have enabled campusM end-users to select their preferred mapping technology (Apple or Google Maps) within the setting of the campusM app: 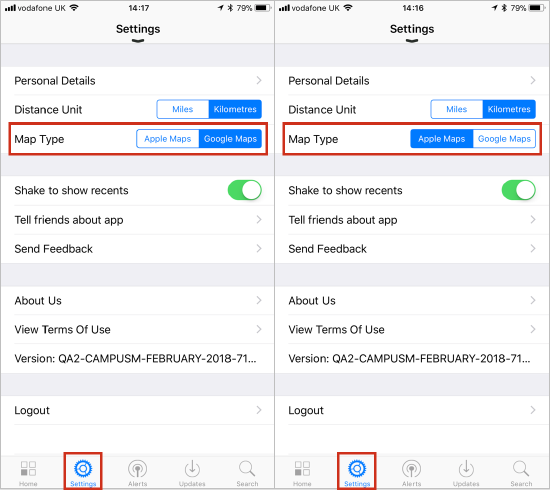 With many institutions having multiple campuses, both nationally and internationally, we have made the campus Map lists location sensitive, with the map corresponding to an end-user’s current location shown first, and subsequent maps defined by the sort order within campusM App Manager. With many institutions having multiple campus, both nationally and internationally, we have enabled end-users to be able to pick up their current location within the browser and show the map associated with their current position. End-users have the ability to identify a particular campus map as their default map, if more than one map is presented in campusM. This orders the selected campus map at the top of the map list, regardless of the end-user’s actual geographical location or any sort order set within App Manager:

The default position marker for positions within the campus maps have been changed and made consistent between campusM iOS and Android apps.