Skip to main content
If you are working with Primo VE and not Primo, see Search Expansion with Controlled Vocabulary for Primo VE.
Return to menu
The Controlled Vocabulary service is an external Primo service (similar to AutoComplete) that expands user searches with words and phrases that constitute variations of the search term with the same meaning, thereby increasing the accuracy of the users' searches. This service is similar to the expansion with synonyms feature but is more robust. The expansions are visible on the screen and add, for example, variations of the search term with the same meaning (example ADHD and attention deficit disorder, or name variations such as assata shakur and asata shakur). Users are provided with an option to revert to using only their original search term. All customers will see this expansion above the results in searches that include the Primo Central search scope. For all hosted customers (not on-premises), these expansions are applied to local search scopes, too. Over time, the controlled vocabulary repository will be extended so that users see more expansions in their search results.
For example, if the user enters heart attack in the query, Primo also returns results that include myocardial infarction. If the user is interested only in results that include heart attack, the user can select the link to the right of the recommendation. This service is applicable to both on-premises and hosted environments, but it is available only in the new Primo user interface. With a later release, it will be available in the classic user interface as well.

Controlled vocabulary suggestions are realized through the Automatic Query Expansion feature in CDI, which utilizes mappings adopted from various controlled vocabularies including LCSH (Library of Congress Subject Headings) and MeSH (Medical Subject Headings). In general, CDI suggestions are more conservative. CDI maintains a curated synonym list that is regularly updated. Requests to add new controlled vocabulary terms are welcomed and evaluated on a case-by-case basis.
Out of the box, this service is enabled. If you would like to disable it, clear the Use Controlled Vocabulary Search Expansion check box in the Search Engine Configuration Wizard (Primo Home > Advanced Configuration > Search Engine Configurations). 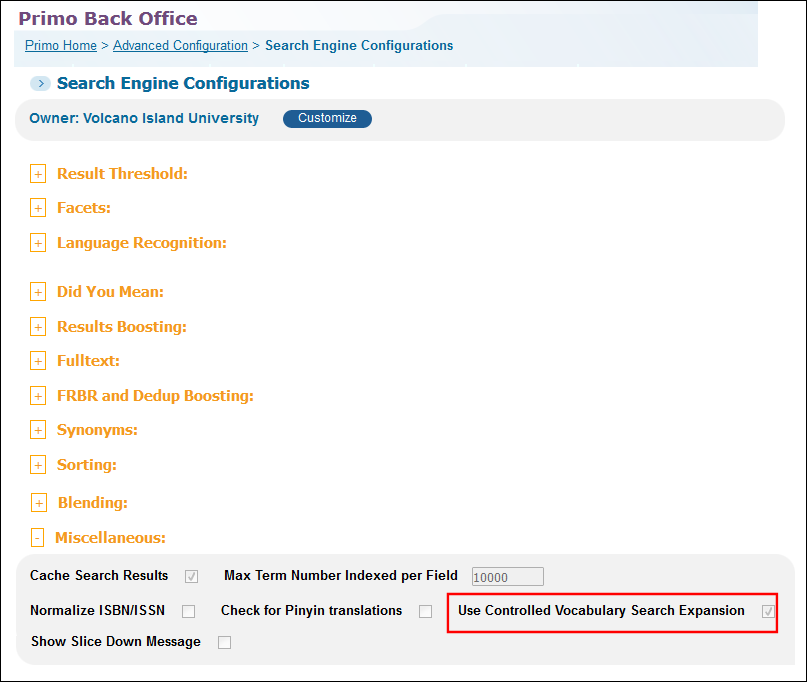 Enable/Disable Controlled Vocabulary Expansions
The following codes in the Results Tile code table allow you to modify or translate the labels for this service: